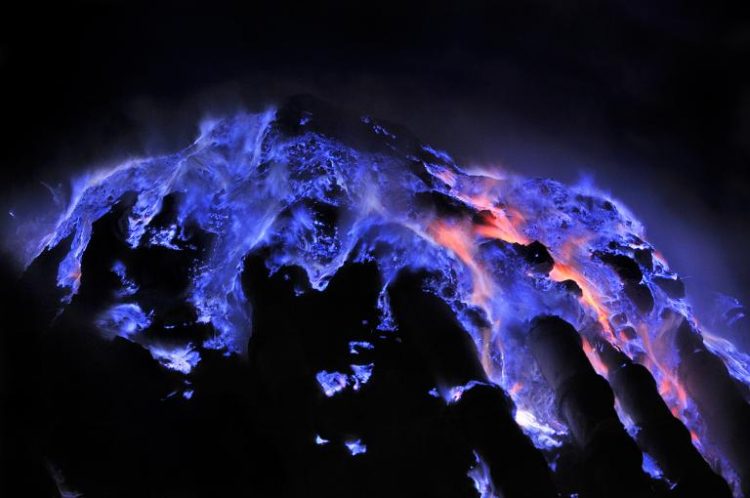 Ijen Crater Blue Fire, which is shown in the picture,  is one of amazing phenomena you can expect to see when trekking to Ijen Crater in Banyuwangi, East Java, Indonesia. The Ijen caldera is the largest, and arguably the most impressive, blue flame area on Earth. A highly acidic turquoise lake spans a kilometre across the base of the crater.

The glow of the crater is quite unusual for a volcano as it is not the lava. According to Grunewald, It is  the light from the combustion of sulfuric gases. Those gases emerge from cracks in the volcano at high pressure and temperature—up to 1,112°F (600°C). When they come in contact with the air, they ignite, sending flames up to 16 feet (5 meters) high. Some of the gases condense into liquid sulfur, which continues to burn as it flows down the slopes. This make some people thought the liquid sulfur as the lava.

Grunewald also mentioned that the lava at Ijen Crater is not isn’t colored significantly differently than the lava at other volcanoes. They are all differ slightly based on their mineral composition but appear a bright red or orange color in their molten state. But at Kawah Ijen, extremely high quantities of sulfuric gases emerge at high pressures and temperatures (sometimes in excess of 600°C) along with the lava.

Are you interested in exploring the amazing Ijen Crater Blue Fire? Try to do a trekking adventure to this place. You will be amazed of the amazing surrounding scenery. Not only will you discover the magnificent blue fire at Ijen Crater, you will also enjoy the amazing sunrise from the top of Mount Ijen. Be prepared though, as you need good level of fitness to do a 4 km trekking.