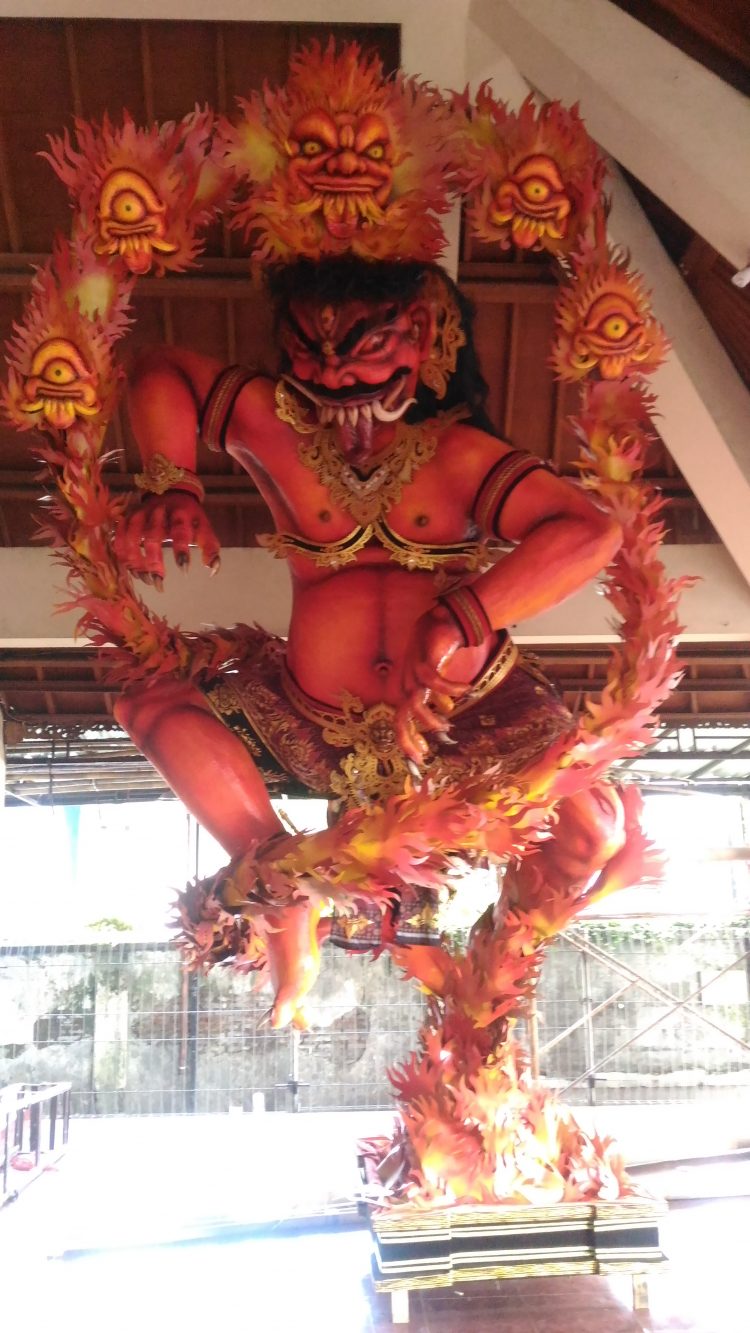 Ogoh-ogoh Bali- If you happen to be in Bali, you might wonder why today’s traffic seems worse than the days before. Here is the reason. Today is Pengerupukan day in Bali, and every youth organization exhibits their Ogoh-ogoh near the main road. Later this day they will have a procession around the village and main crossroad before the entire puppets burn to ash. There are some facts that you need to know about this demon faced puppet.

Ogoh-ogoh is quite a new addition to Nyepi procession. Ogoh-ogoh was taken from the word “ogah-ogah” that means to shake. During the procession, the people will shake the puppets while carrying them. In 1983, the President of the Republic of Indonesia, Soeharto, announce that Nyepi will be a national holiday. To celebrate this, some youth group create paper puppets. In 1990, the Ogoh-ogoh paraded in the 12th Bali Arts Festival during its opening ceremony. Since then, Ogoh-ogoh becomes a part of Nyepi tradition in Bali.

Ogoh-ogoh is the symbol of negative forces so that they look like a demon. With their big body and fierce faces, these paper puppet can make any child terrified. The common depiction of Ogoh-ogoh is a big giant with protruding eyes and big tusks.  In the Pengerupukan Day, people believe that the negative forces or Buta Kala awake in the transition between day and night. People will have a small offering in every household and make the loud noise around the house.

The Ogoh-ogoh parade starts at this time. The Ogoh-ogoh will be carried around the village and encircle the main crossroad. It is the symbol that the Bhuta Kala back to their home through the four directions. After that, people take the Ogoh-ogoh to the cemetery and burn it. It’s also a symbol of burn all the negative forces within the self before entering the Nyepi Day.

Two months before the pengerupukan day, people usually start their Ogoh-ogoh making process. First, they will create the concept. This concept can be taken from folks tales, mythology, or urban legends. On 2017, some Ogoh-ogoh become a trending topic in the internet because of their novel concept. One of them is “Siwer Mas Ogoh-ogoh” from Banjar Tainsiat. The concept is the black magic spell that can make someone turn into a golden giant.

Second, make a construction.  They will make the “skeleton” from iron or wood and then make weave the bamboos to create the impression of the body. Lately, some people are creating eco-friendly by making all the parts of Ogoh-ogoh from eco-friendly materials. They do not use any iron in the Ogoh-ogoh skeleton. They also start to create the mask in this step.

The third step is decorating. After the body from bamboo is finished, it is time to put the paper to cover the body. This may take 2 to three weeks. Meanwhile, some people in the group will create the decoration. Ranging from the simple one made of cardboard and golden paper to the luxurious one made from carved buffalo skin and gold leaves. Some eco-friendly group using dried leaves as the skin of their Ogoh-ogoh.

The last step is decorating the body. Clothes with gold leaves, bracelet, anklet, necklaces are used to decorate the body. After the body finished, the most difficult part takes place. Installing the mask and headdress will need a lot of patience and should be done carefully. After the two month hassle, the  Ogoh-ogoh is ready for the parade.