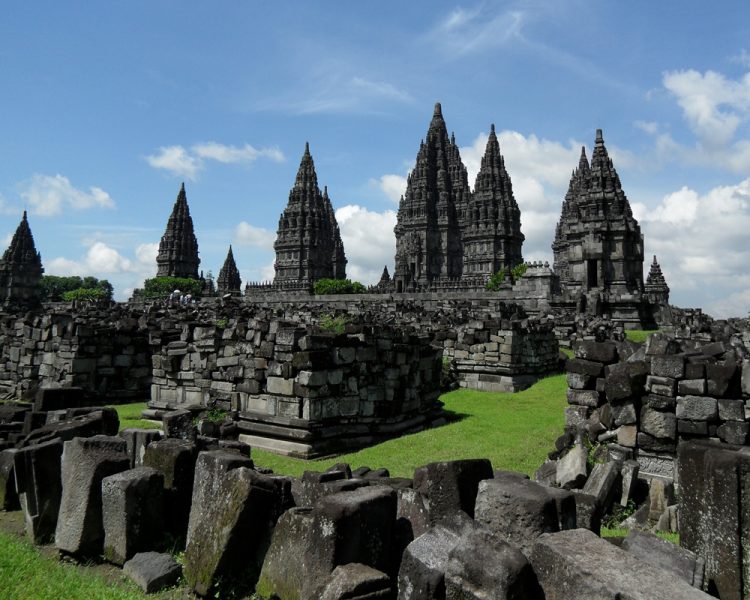 The Prambanan Temple: Symbol of Harmony

If you are planning to visit the Borobudur Temple, you should also visit the Prambanan Temple too. But you cannot visit both in one day. You need a whole day to explore each of them. While the Syailendra Dynasty builds the Borobudur Temple for worship Buddha, the Sanjaya King built the Prambanan to worship Hindu Gods. The Gods of Hindu Belief known as Trimurti consists of Shiva, Brahma, and Wisnu.

Scientists believed that the Prambanan is the biggest and the most complete of Hindu Temple in the world. The Sanjaya Dynasty built the Prambanan in the 9th Century, around 50 years after the Borobudur Temple was built. This masterpiece of stone carvings is also one of evidence of the harmonious between two religions in the ancient time. The history is written about the marriage of the princess of Buddhist Sailendras Dynasty (ruling the South of Java) and the prince of Hindu Sanjayas of Old Mataram (ruling the North of Java). So, the King built the Prambanan Temple to perpetuate the unity of two dynasties in Java Island.

Natural Disasters and the Reconstruction Work

Unfortunately, natural disaster harmed it and caused major damages.  In 17th Century volcanic eruption and earthquake demolished the temples. For a long time, the temple was forgotten and abandoned in the jungle. Only in the 17th Century (1733), a Dutchman CA Lons rediscovered it. Since 1937, the Government of Indonesia through aids from many international donors/organizations started to reconstruct the Prambananan Temple to restore its authentication. Yet another catastrophe hit the temples, in 2006 the earthquake again devastated it. The reconstruction work has successfully restored the major part of the temples.

The Beautiful of Stone Carvings

Not only the gods, but the ‘vehicles of gods’ also have their own temples. Some shorter temples called Garuda, Nandi, and Hamsa respectively intended for the ‘vehicles’ of those gods. The Prambanan Temple itself has 240 small temples. The height of the tallest temple is 47 meters high. Decorations of the temples are so wonderful, stone carvings of the reliefs illustrating the Ramayana Epic. Therefore, walking on foot to go around the complex is the best way to enjoy the landscape and the detailed architecture.

Later, the management of the Prambanan temples developed two theaters to equip the temples. Visitors can enjoy Prambanan Ramayana Ballet where the show took place in those two theaters. During the dry season, the show uses open-air theater, on the other hand, the show takes place in indoor Trimurti Theater during the rainy season. The show staging a fusion of theatrical and musical performance of Hindu Epics. It involves more than 200 professional dancers and gamelan musicians. The schedule of the show is every Tuesday and Thursday nights at 7.30 PM. During full moons evenings between May to October, the show plays “the King Ramayana” epic.

Contact us, YoExplore to further discuss your next holiday trip to Borobudur and Prambanan temples and some other tourism spots in Yogyakarta City. We have a special offer to you.

One thought on “The Prambanan Temple Compound”