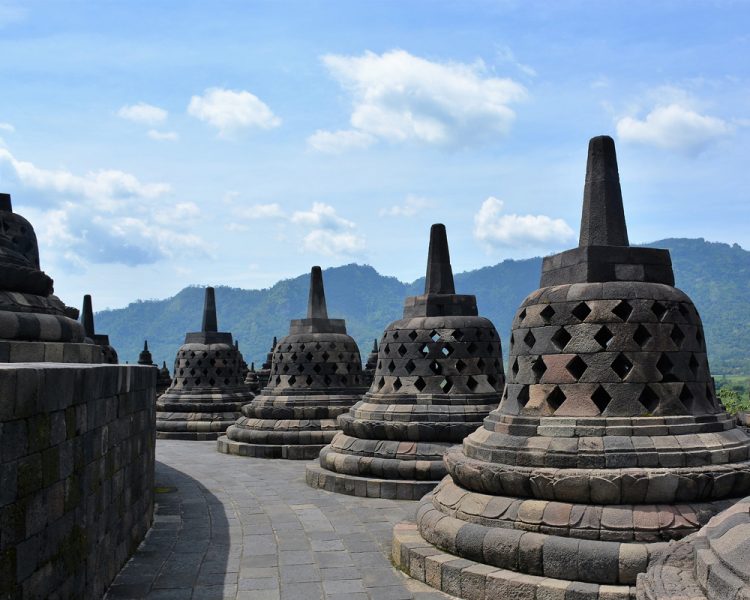 The Masterpiece of Ancient Architecture

Some 1,200 years ago or in 8th Century, Syailendra King ordered to build Borobudur Temple Compounds. Builders carted over two million stones from rivers and streams to create 29-meter high step pyramid. The temple’s design in Gupta Architecture and its stonework is incomparable since it was built without the aid of mortar or cement. The Borobudur Temple covers an enormous area, 123 x 123 meters or 55,000 square meters with 29-meter-high step pyramid, decorated with more than 500 Buddha statues and 2,672 relief panels. In addition, you can see ships, elephants, dancing girls, musicians, kings and warriors carved into stones. No wonder if it took 75 years to accomplish the project.

However, after the fall of Syailendra Dynasty Borobudur Tabandoned left and the eruption of Merapi Mount caused it buried under volcanic ash. Fortunately, after ten centuries of neglection, Sir Stamford Raffles, the  British Governor of Java rediscovered it in 1815. Furthermore, in the 1970’s UNESCO assisted the Government of Indonesia to restore its former majesty through “Save Borobudur” campaign. The restoration works was a big effort which took eight years. Finally, in 1991 UNESCO listed Borobudur Temple as one of world heritage. And the magnificent of the Borobudur Temple can exist until today.

Location of The Borobudur Temple

Precisely, the Borobudur Compounds located in the Kedu Valley in the South of Magelang City, the part of southern Central Java. Over millions of visitors over the world have ever visited the Borobudur Temple. it is about 25 miles or 40 kilometers from Yogyakarta City and we can reach the site by driving only for one hour. There are many flights a day from Jakarta or Bali directly to Yogyakarta. Alternatively, from Jakarta, we can reach Yogyakarta by using trains. The train trip from Jakarta heading to Yogyakarta are available several in a day.

The Breathtaking Views of the Borobudur Temple

During the journey to reach Borobudur, we can enjoy the fresh cool air of Magelang City. Walking on the foot is the best way to explore the ten floors the compounds. Besides, the steps are not too steep. Climbing the Borobudur to reach its top is the best experience especially when a guide accompanies you to explain the history capturing in its relief scenes. You can contact YoExplore to get the best tour guide we have.  Moreover, the view surrounding the temples is breath taking and photogenic. Surrounding by green fields and trees and Merapi Mount at the distance, all this panorama can be seen the best at the top of the temples.  Also at the top, we can do meditation and restore our energy after walking on foot around.

Exploring the Heritage of the Borobudur Temple: Yogyakarta Cultural Event

The management of the Borobudur Temple Compounds organizes many art and cultural events each year. For 2017, there are 25 event packages that have been prepared for an event called “Yogyakarta Cultural Events“. You can see the list of events for period August – December 2017 here. Contact us for the best offer we have for you!

2 thoughts on “The Magnificent of the Borobudur Temple”